We are a faith community centered in Jesus Christ empowered by the Holy Spirit to proclaim God's love and the Gospel message through word and action to all.

As early as 1819, just three years after Tuscaloosa was founded, Catholics were numerous enough to hold meetings to explore ways to bring a priest to celebrate the sacraments. In July 1830, Bishop Michael Portier sent Rev. Mathias Loras, VG, and Rev. Gabriel Chalon on a tour through Central and Northern Alabama. 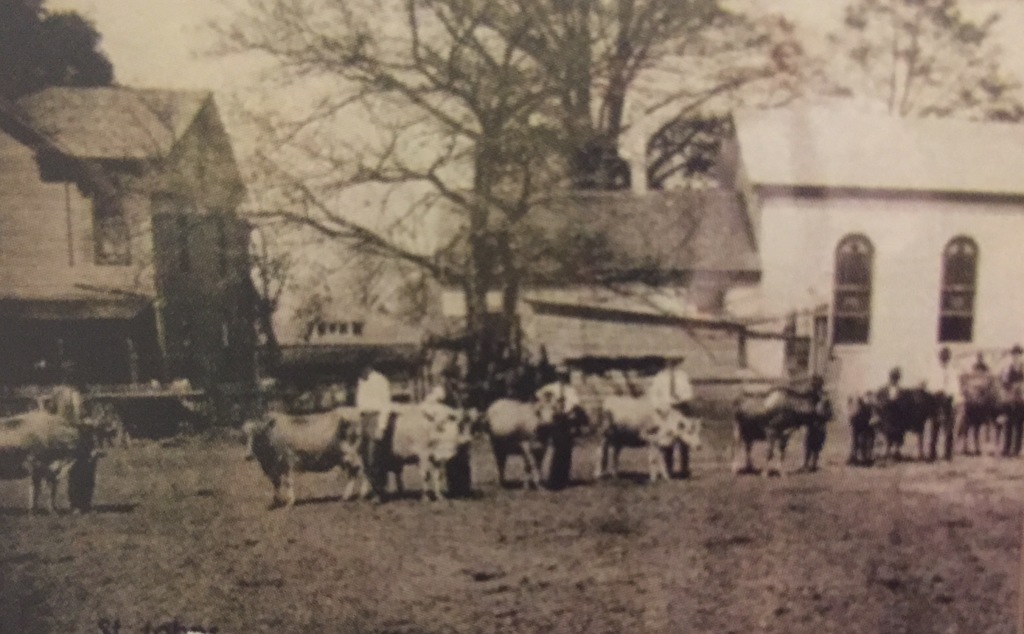 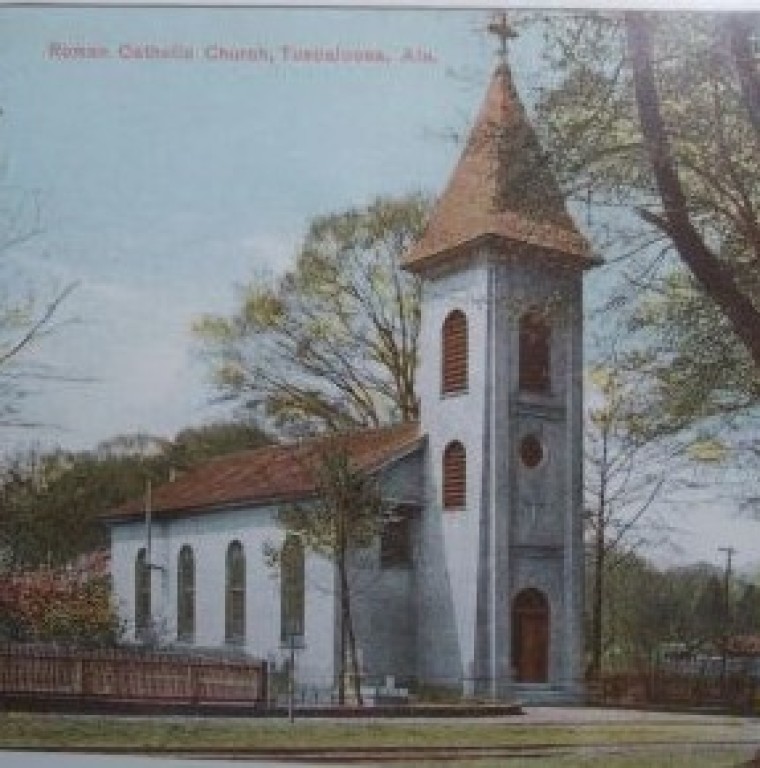 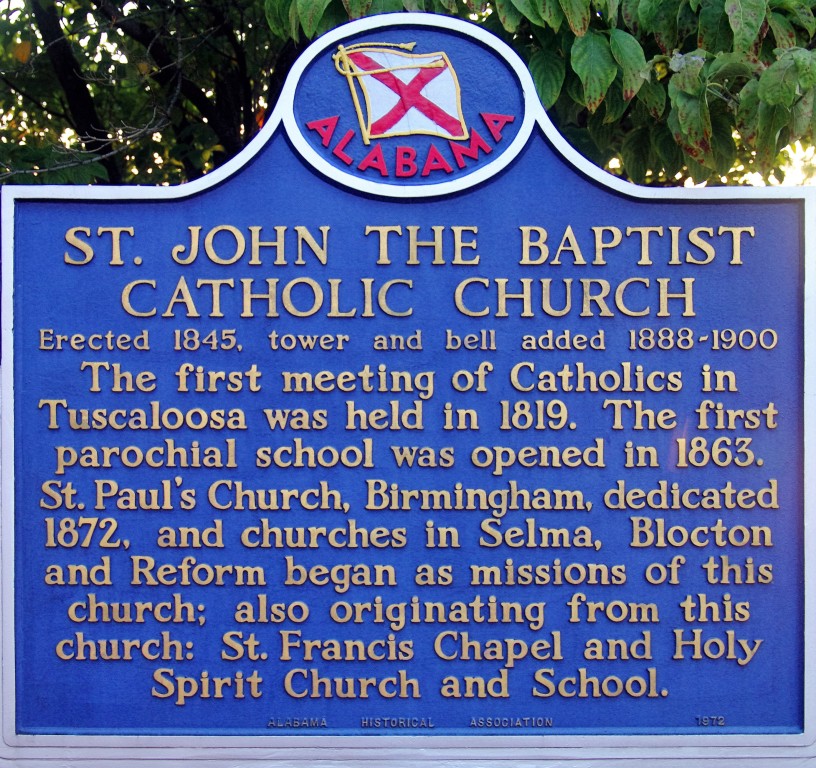 They visited and administered sacraments to the Catholics in Tuscaloosa, offering Mass in a private home. Fourteen years later, Saint John's Parish was established in Tuscaloosa in January 1844. In May of that year, Pastor Rev. Patrick Hackett formed a building committee. Bishop Portier, assisted by several priests solemnly dedicated the church under the patronage of St. John the Baptist on January 25, 1846.

From 1967, a plot of land on the corner of 14th Avenue and 11th Street in Tuscaloosa was the site of Saint Mary Magdalene Catholic Church, home to an education center for dozens of black Catholics in Tuscaloosa. 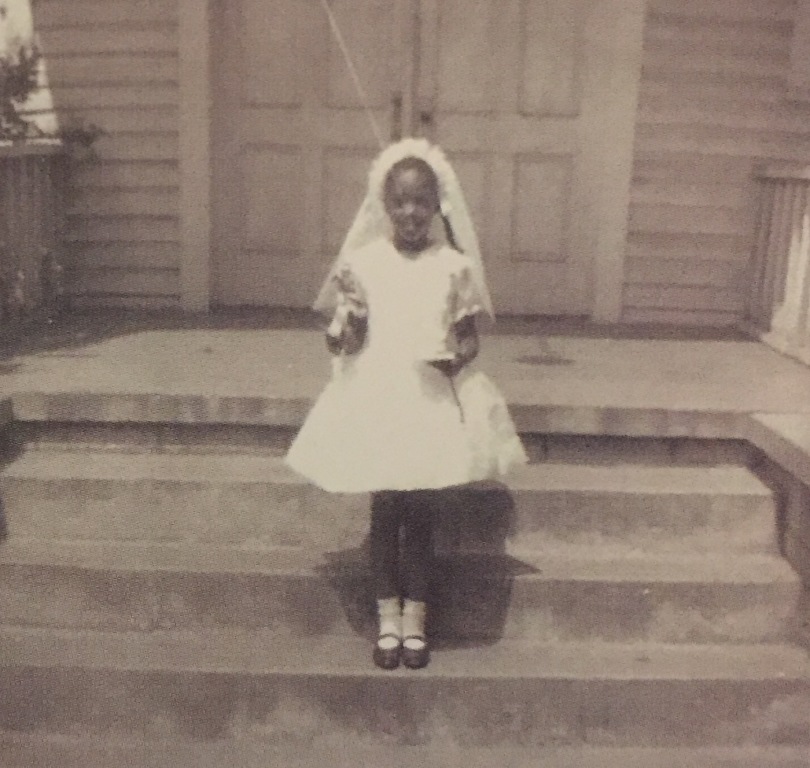 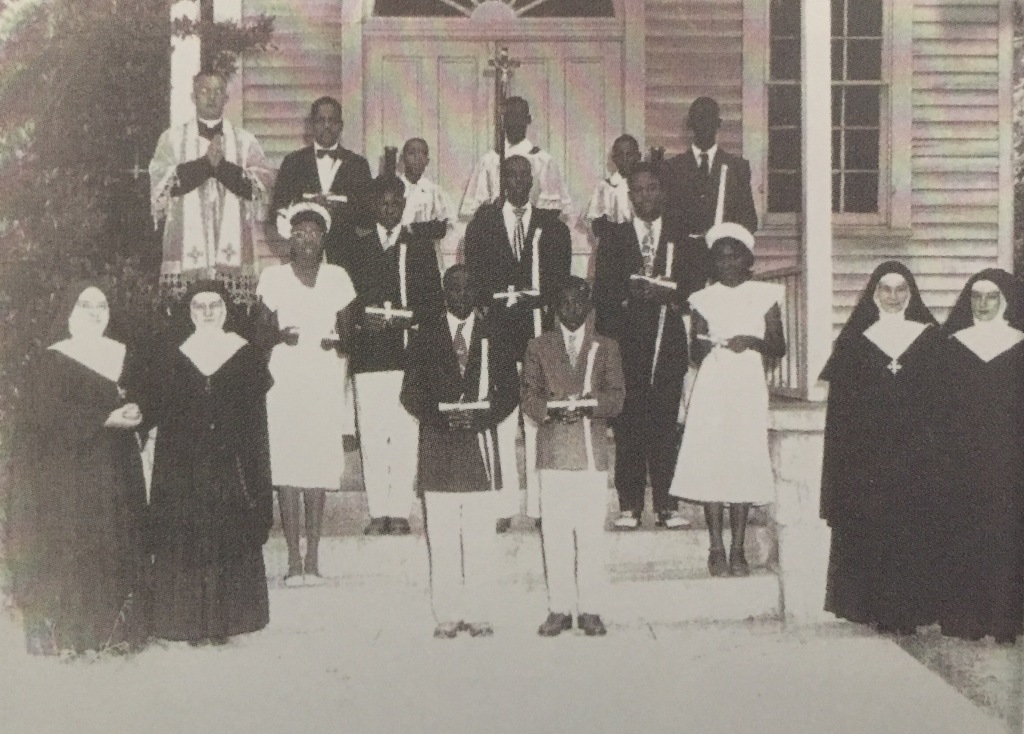 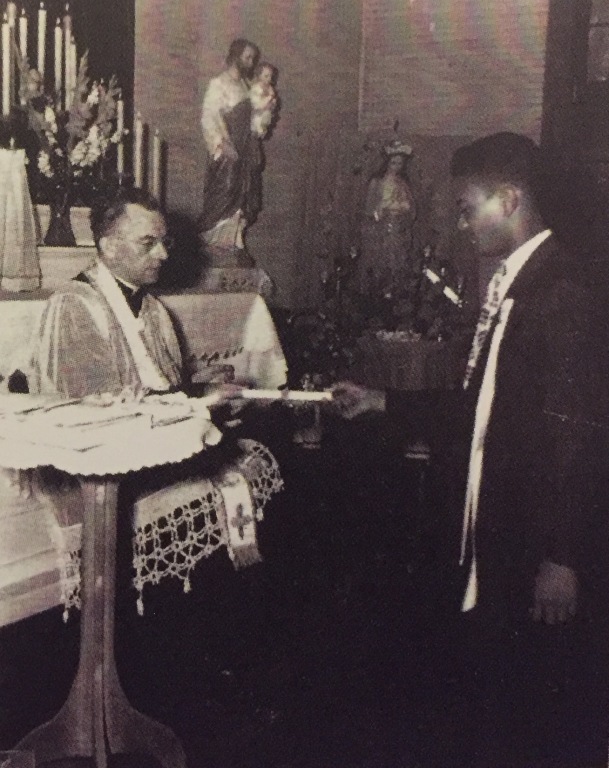 The church was disbanded in April 1967. In late March of that year, it was announced that the church property had been sold and members were to start attending either St. John's Catholic Church in downtown Tuscaloosa or Holy Spirit Catholic Church.

The following week an article in the Tuscaloosa News appeared saying that the church would be moved or demolished. By May 1, nothing remained of the church; however, their bell that rang for 51 years now rests permanently on a pedestal on the west side of Holy Spirit Church as a symbol of unity.

After the church's demolition, most of the official church records went missing. While the paper trail of the former church and school is lost, the legacy is not. Former members of St. Mary Magdalene Church are still present in Tuscaloosa's Catholic congregations today.

In 1958, Archbishop Tomas J. Toolen approved a building program for parishoners of St. John's Parish because of the rapid growth of the parish in which both church and school facilities were inadequate.

‘Holy Spirit’ was the chosen name for the new parish. A 25-acre tract of land was purchased by Rev. Edward Berriault in January 1959. Construction began on the new school and all-purpose building, and was completed in 1962. The Benedictine Sisters moved into their new two-story convent and began to teach in the new school in the fall of 1962. Archbishop Toolen dedicated those buildings on January 27, 1963. 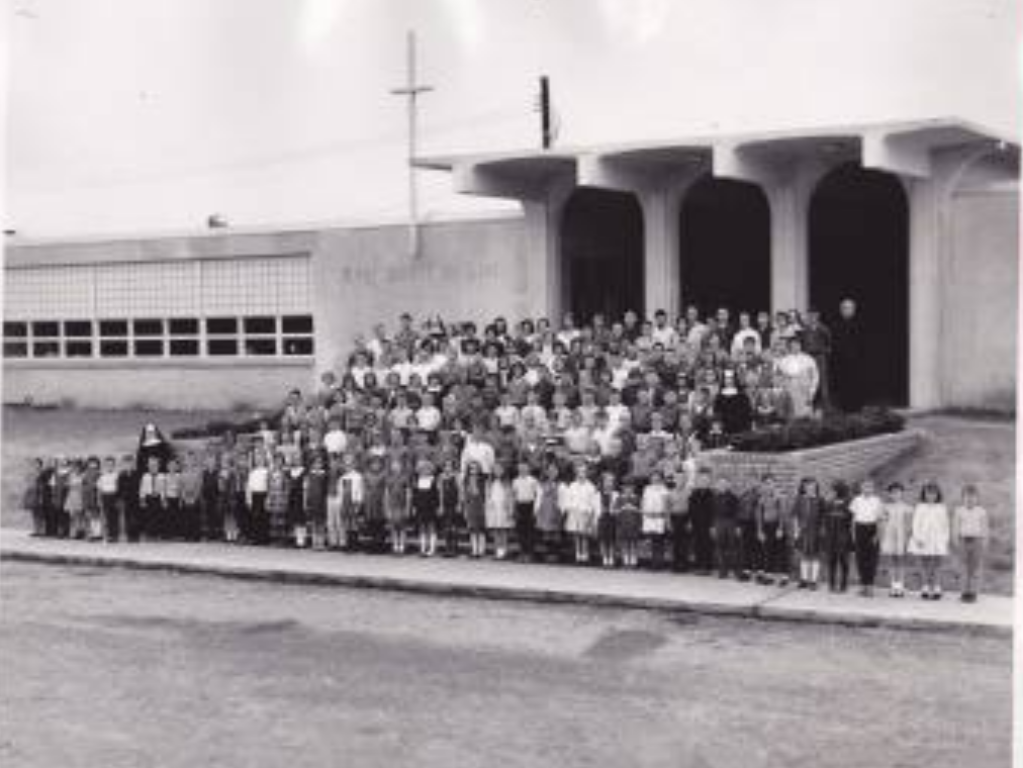 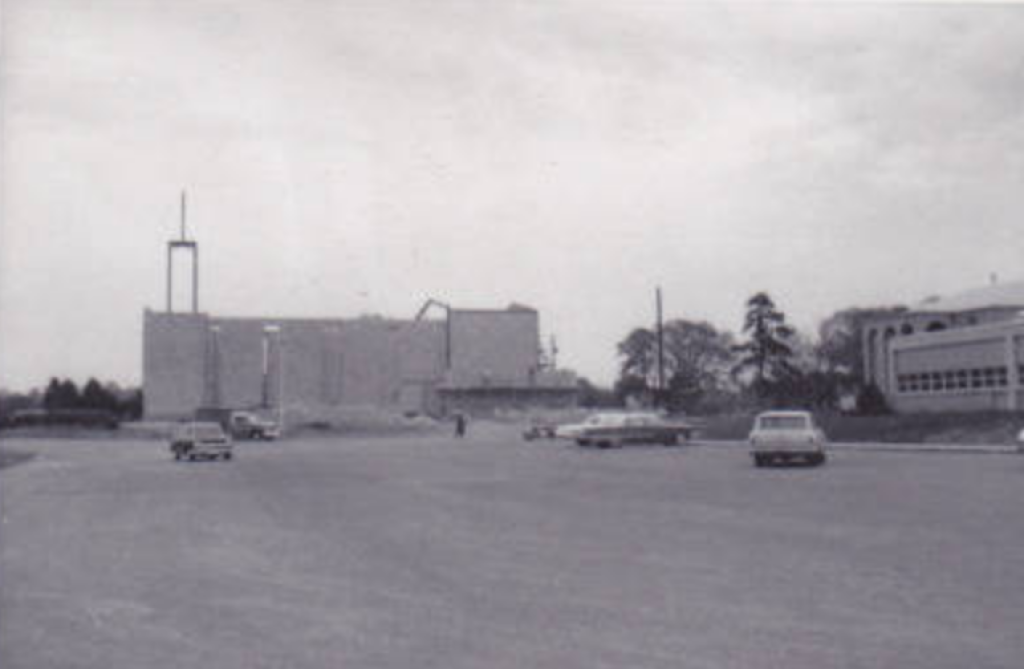 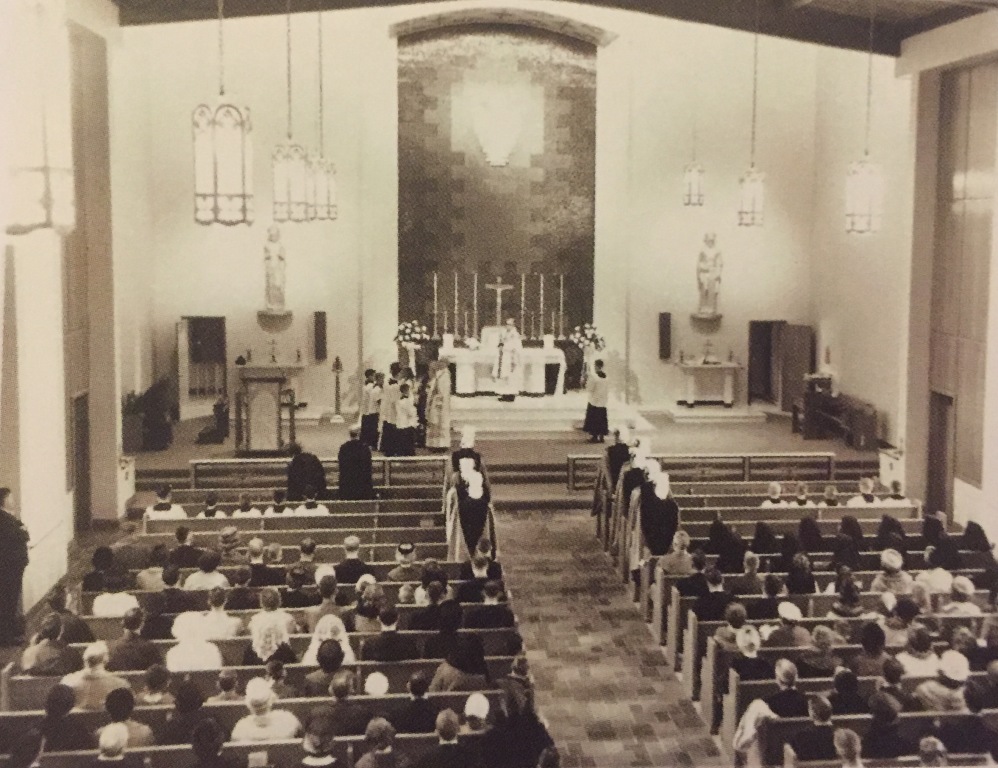 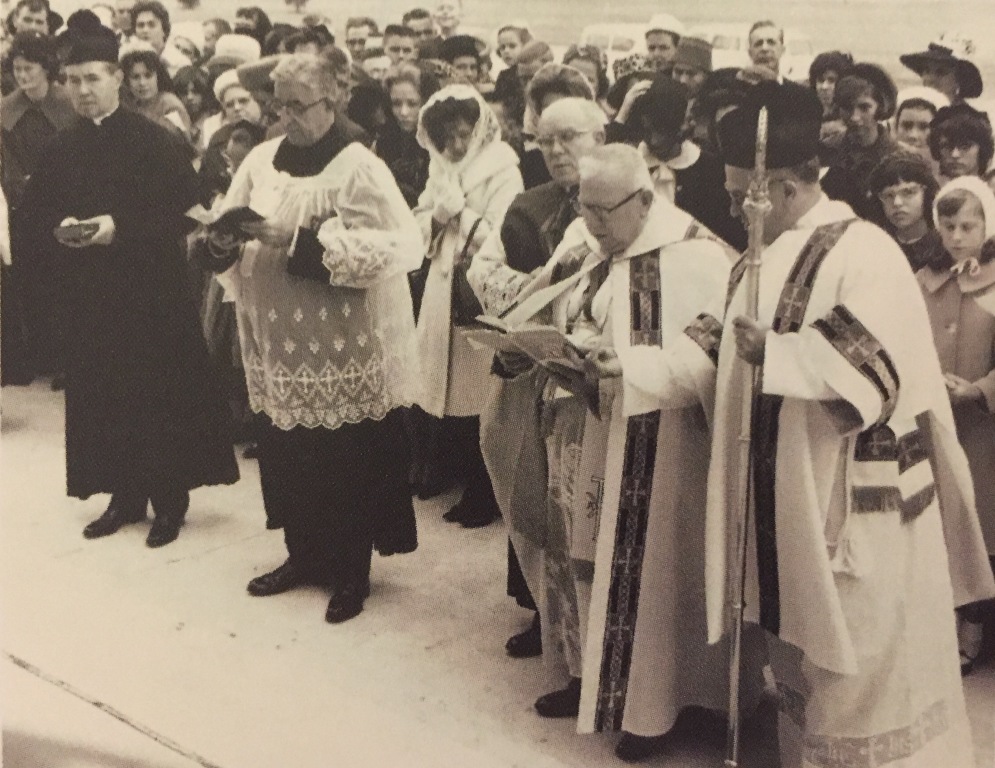 In October 1963, the groundbreaking ceremony for the new church was held. Construction was started on the new rectory. The church was completed in 1964 and mass was offered on November 8th. Archbishop Toolen officiated at the formal dedication of Holy Spirit Church on January 3, 1965. Very Rev. Vernon Gallagher, C.S.Sp., Provincial of the Eastern Provence of the Holy Ghost Fathers, preached a sermon.

TO PLAN & BUILD A CHURCH

In 1958, 25 acres of land were purchased by Bishop Toolan of Mobile. Since then, a Catholic elementary school was built in 1964, followed by the first Holy Spirit Catholic Church building in 1965. Later the parish acquired an additional 31 adjacent acres. In 1999, Holy Spirit parishoners began discussing the need to replace the original structure with a new Holy Spirit Catholic Church. Although the church was much beloved, there were many reasons to consider change, primarily size and acoustics. The original church had a pew capacity of only 380. Many masses overflowed making concentration on the mass difficult. The acoustics resembled a cave with resounding vibrations off the walls, making it difficult for people to understand what was being said throughout the mass.

Many locations were considered, both on and off campus. With the help of a consulting architect, the decision was made to build the new church on the highest point on the parish grounds, the same place as the original structure.

A survey of parishoners provided insights for new features that should be included. The survey results also indicated that the parishoners wanted as many of the existing artifacts to be preserved and reused in the new church. Consequently, the rose window was kept with its original frame, and refit with all new glass. The day chapel would be a representation of the old church. All artwork by Frank Engel was given a meaningful home in the new church. The gold statues of Mary and Joseph, the Holy Spirit dove art piece, and the Stations of the Cross were placed in the day chapel with effective lighting. The two apostles wall art pieces were placed on the back walls of the main sanctuary in the new church. Most of the original stained glass was reused as the wall between the day chapel and the gathering area. 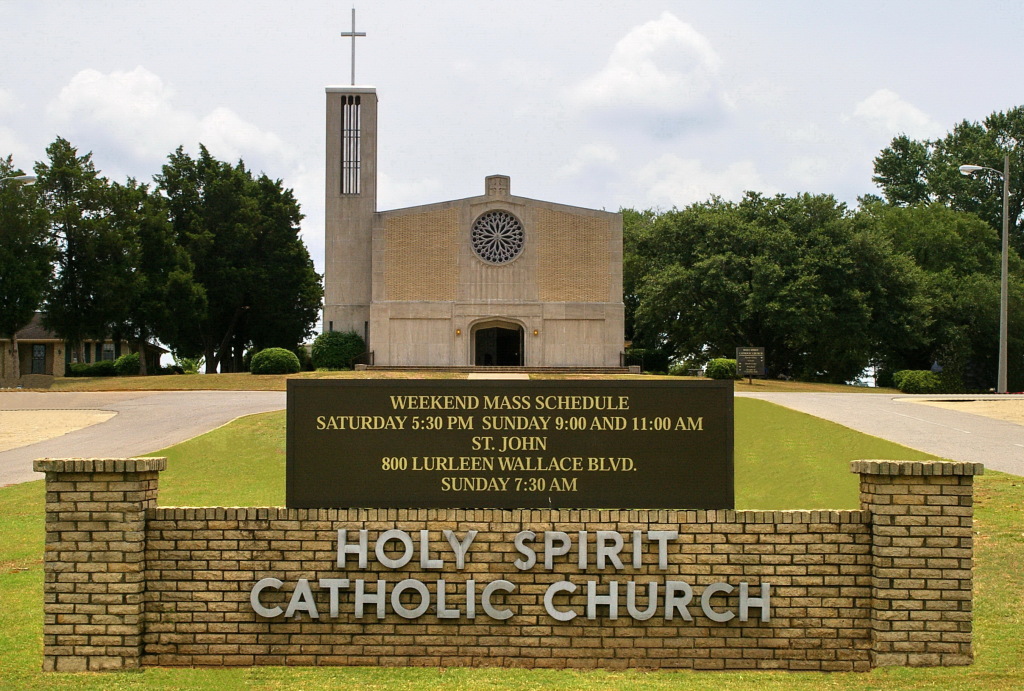 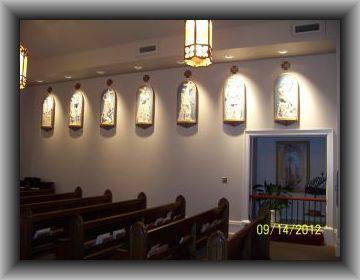 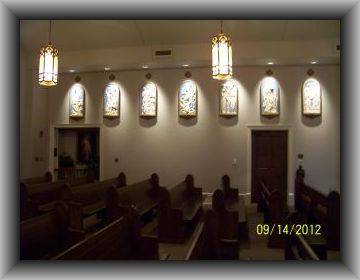 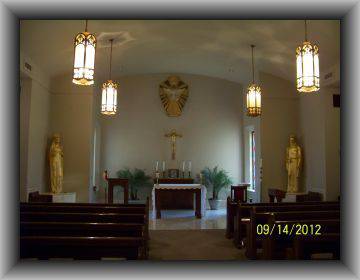 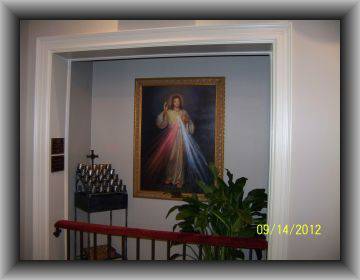 The architectural firm of PH&J was hired with lead architects Griffin Harris and John Gandy. A formal committee was formed and multiple architectural ideas were entertained. After careful consideration, the guidelines for the new church included at least 1,000 seats, with all seats focused on the altar. The main sanctuary would have no interior columns and would have as much natural light as possible. The air conditioner had to be so quiet that no one would know when it turned on and off. Most importantly, the spoken word had to be clear. After visits to many churches of many denominations all across the state, the cruciform design fell into place. 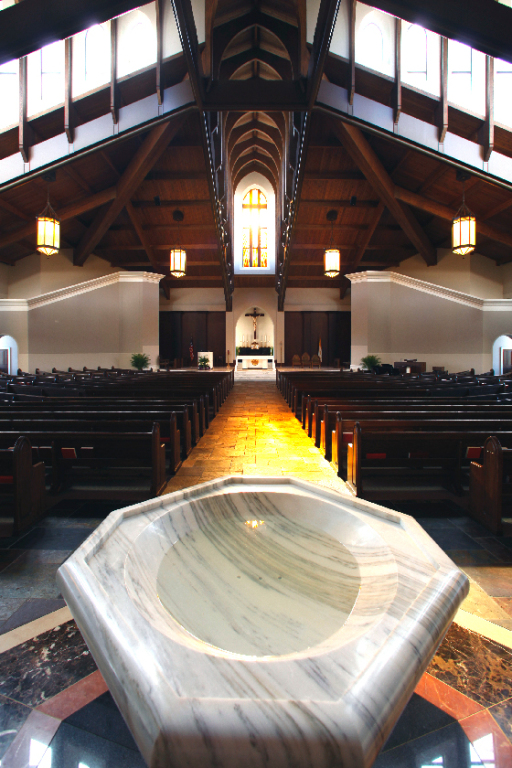 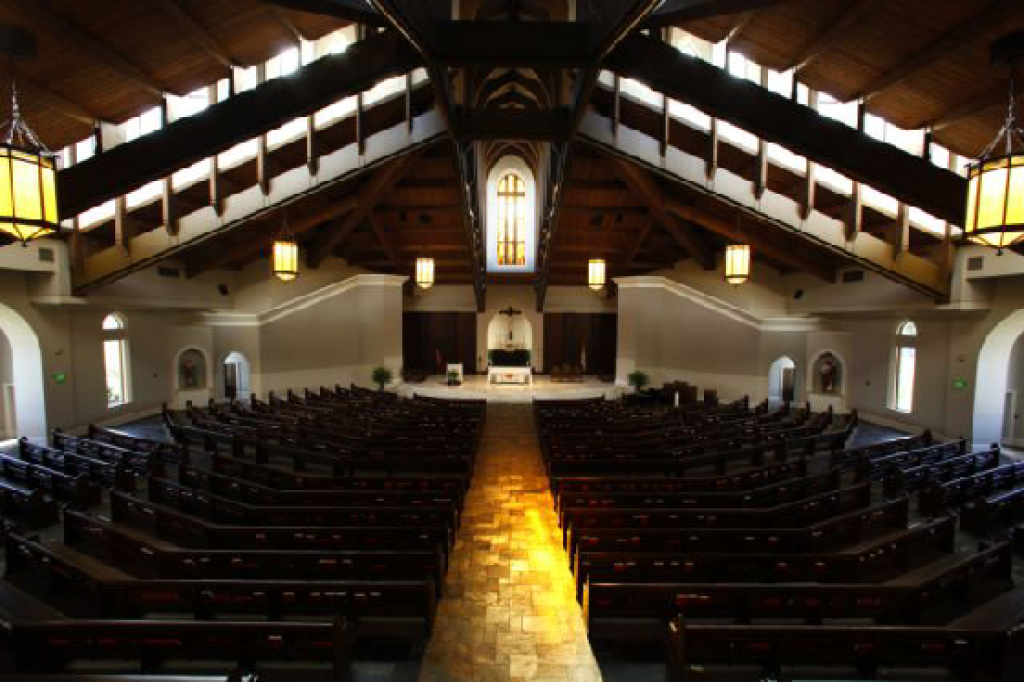 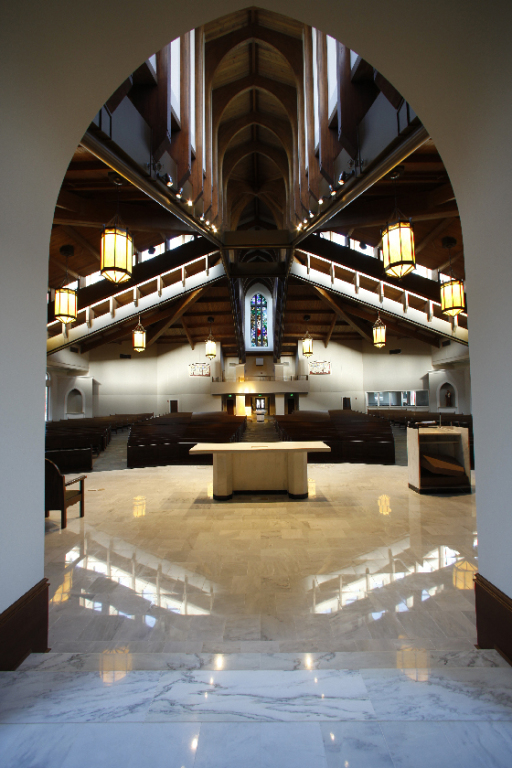 Some very emotional moments occurred on Good Friday morning 2009, two days before the first mass would be held. The corpus had just arrived from Italy, and the construction of the wooden cross was completed by Deacon Bill Remmert's crew at his woodworking company. The finished crucifix arrived at sunrise and was carried into the church in silence, not by plan but by pure instant emotion. A small group of people had gathered near the altar. Deacon Fran Viselli carefully washed the body of Jesus. The crucifix was lifted up and attached to the wall. With tears in their eyes, the group left in silence. 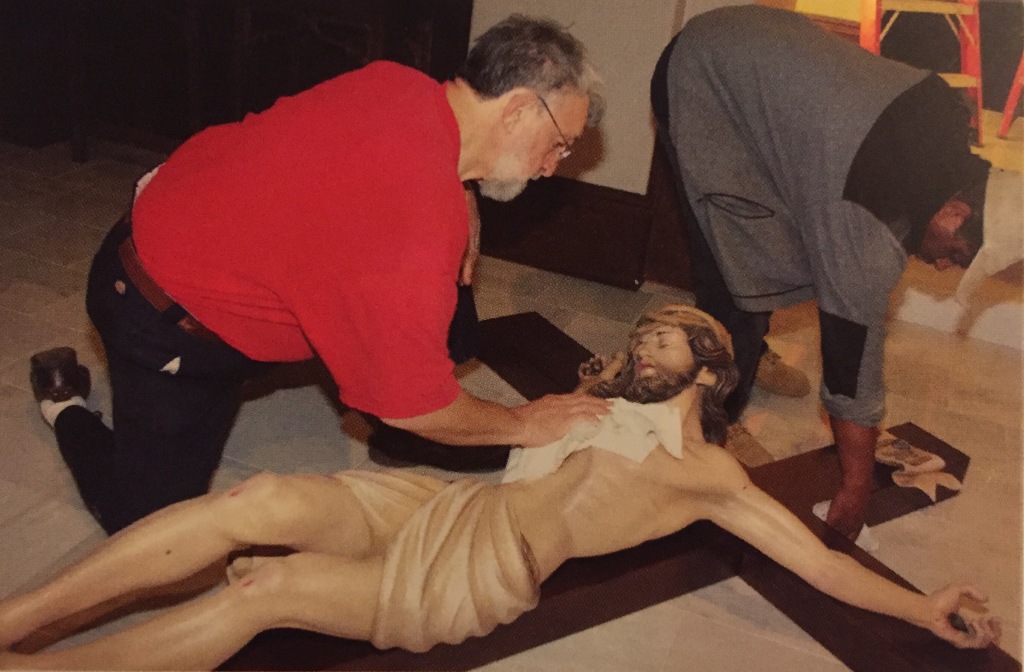 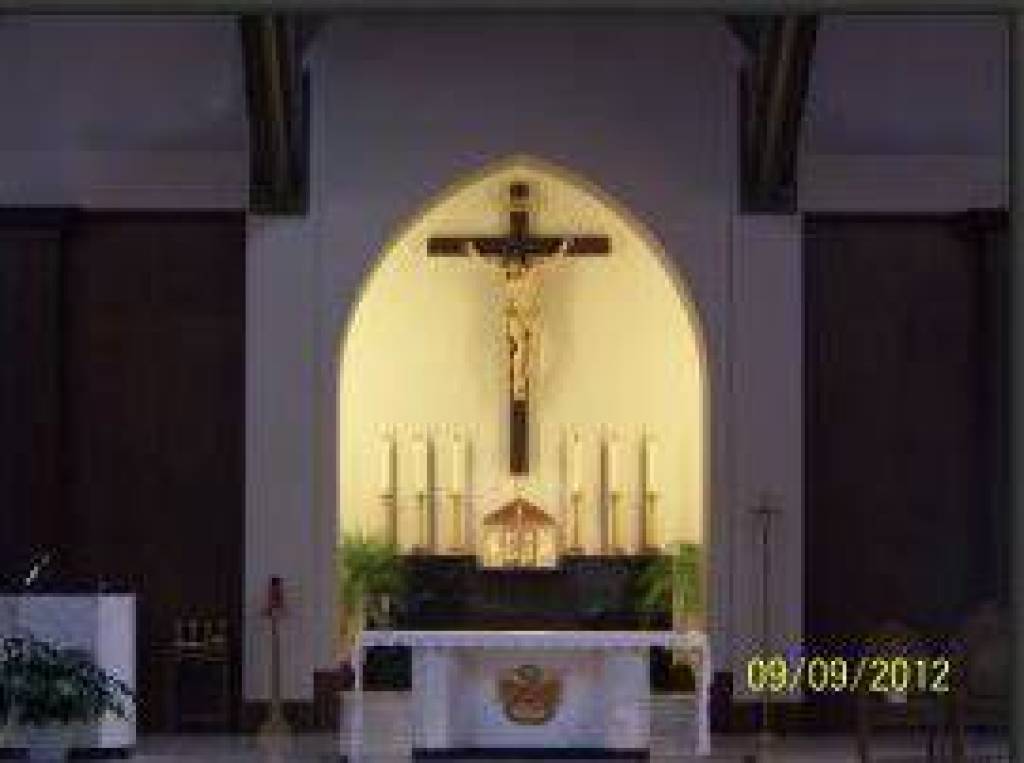 Three artifacts from St. Mary Magdalene's Church arrived unexpectedly. The wooden holy water dispenser in the chapel was found at a garage sale 15 years earlier, brought by Joan Rollins and donated to the church. The cast iron bell from the steeple of the church that was suddenly closed in 1967 was stored for many years in the base of the Holy Spirit bell tower. It now holds a place of honor on a pedestal south of the porte cochere. The statue of St. Martin de Porres, Patron Saint of Social Justice, had been stored in a closet of a niece of Fred German, and was donated to the church the week before the first mass.

The management of the design and construction process of the church was facilitated by Joe Thames of HFS Holdings. His experience and expertise were invaluable in keeping all stages of the project on time, within budget and on the highest quality. In addition to many other tasks, he coordinated each of our stained glass window designs with the fabricator in Virginia. His patience and attention to detail were invaluable.

The entire building committee spent countless hours working together. Although there were times of consternation and the entire project was on the verge of collapse on at least three occasions, each time the Holy Spirit seemed to intervene and guide the committee in a better direction. Perhaps the greatest parishoner contribution was by Jeff Junkin, the construction superintendent for the general contractor, Amason and Associates. His physical strength, concern and love can be seen and felt every time one walks in the doors and looks up at the massive beams that hold this church together. 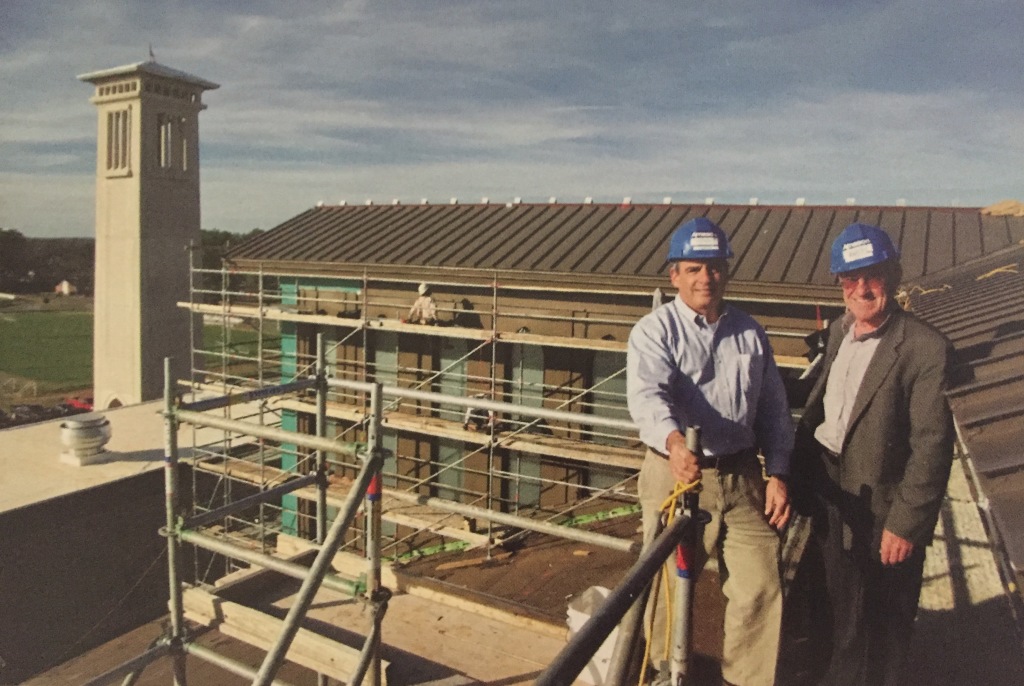 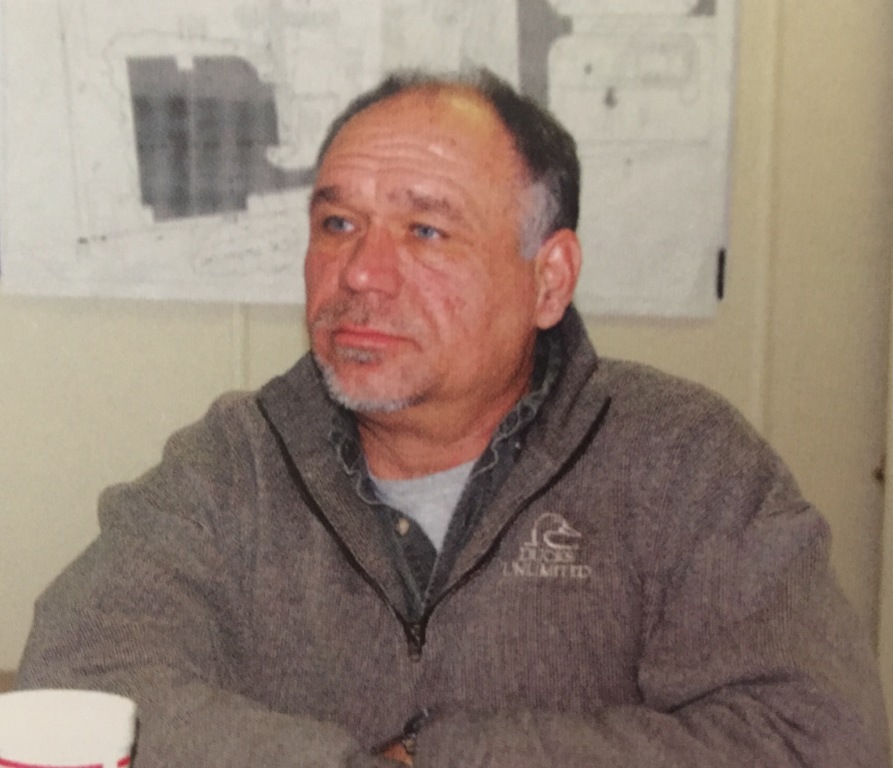